Cakes history began in ancient Rome, when they were thrown at the bride as a sign of fertility – or the groom would smash a barley cake over the bride’s head, for a blessed marriage. The guests would eat the crumbs as a symbol of happiness and good luck.
In medieval England they replaced the bread cakes for sweet buns, and these would be stacked in front of the newlyweds, who would attempt to kiss over the bun pile. If they succeeded the couple would bear many children and would have a long and happy marriage.
By the late 17th century, the cake was made of mince meat pies, and a glass ring was hidden during preparation. Or charms. The lucky female, finding the ring, would be the next wed. King Charles II had the first tiered cake, with short broomsticks to separate the cakes.
Other charms were;
Heart – true love
Rocking chair – long life
Anchor – adventure
Flower – new love
Purse – good fortune
Wishing well – your dreams would come true
Highchair – children
Clover/horseshoe – good luck
Cakes have traditionally been white for purity of mind, and to show wealth. Originally pieces were passed through the brides wedding ring and offered to the female guests to place under their pillows to dream of their prospective husband. They were fruit cakes for fertility and prosperity symbols.
Cutting of the cake was the most symbolic ritual of a wedding. It was the first task as a married couple, and with the groom’s hand on top, it showed he was in control of the marriage. The feeding of each other the first slice showed mutual respect and commitment to each other. Cutting the cake to the bottom symbolizes the continuity of the marriage.
Fast forward to 2020 onwards, we no longer smash cake over heads and have them white for purity, or full of charms, but we do cut them, symbolizing the first act as a married couple, and kiss, for wishes for a long and happy marriage. 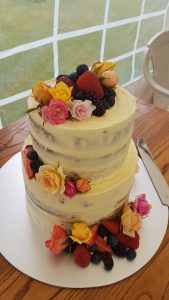